Measuring People in the Workplace, with Ben Williams

I recently had the pleasure of talking with my colleague Ben Williams to discuss how we can measure people in the workplace. Please watch the video above for the full discussion, or if you’d prefer, we’ve captured the key points here:

Ben is Managing Director at Sten10 and I’m delighted to say he’s now a Director here at Evolve Assess, having a major input towards our strategic direction and platform development to ensure optimal performance for psychometric test delivery. Ben wrote a brilliant piece on our partnership together recently, which I’d recommend checking out: Sten10 and Evolve Assess Partnership. The main purpose of our discussion, was to talk about some of the key terms when it comes to psychological assessments. But first, a little about Sten10...

An introduction to Sten10

Sten10 is a firm of business psychologists, set up in 2012. The business was fuelled by Ben’s personal passion of trying to map out the human mind – specifically in business and recruitment. Sten10 design bespoke psychological assessments and are independent, trusted advisors to clients who make assessment recommendations based on clients’ unique requirements. Sten10 work in very close partnership with Evolve Assess, designing many assessments that are delivered via the Evolve platform.

In addition, Sten10 also develop assessment centre materials for later stages in the recruitment processes and design competency frameworks for their clients.

How do we measure people in the workplace?

Ben has always been fascinated by the idea of measuring a person's psychological make up. For example, when psychologists look at personality, time and again 5 distinct factors are identified in the research, regardless of age, culture, gender et c. Similarly, when it comes to cognitive reasoning, psychologists have found people can generally keep about 7 chunks of information in their memory before they start to forget it. Ben was fascinated by the fact that you can measure something that's as seemingly intangible as people's psychological makeup - and that's what he loves about the challenge of his job as a psychologist.

The idea that everyone has their own unique blend of personality traits, reasoning skills and motivation hasn't always been widely recognised. Businesses more often now recognise the value of this deeper understanding of people's makeup.

There are a wide range of benefits for the organisation itself in being able to measure people's traits:


There are benefits for the individual, too:

There are a number of tools that can be used to measure these traits. Sten10 develop a range of psychological assessments, which – broadly – fall into two categories: tests of typical performance, and tests of maximum performance.

These are tests that may be used when businesses are looking at personality or motivation. This is how an individual will typically tend to think, feel and behave, or what tends to motivated to work harder, or demotivated, resulting in them working less hard.

Tests of typical performance are usually self-report, so users must have a reasonable degree of self-insight and be completely honest when answering them. We tend to refer to these assessments as questionnaires rather than tests, as there's no objective right or wrong when it comes to personality or motivation. These questionnaires are untimed and should be answered by candidates based upon their initial response, rather than thinking about it too long.

These types of tests are most frequently used when more of a particular skill is required. For example, more verbal reasoning or numerical reasoning skills, or greater attention to detail. Unlike tests of typical performance, these tests are typically timed, and are not self-report – they actually involve giving people a sample of problems to solve, based within a realistic workplace context.

Tests of this nature are often called ‘reasoning’ or ‘ability tests’.

These tests assess an individual's intellectual horsepower. You may of heard of IQ tests, which are a general measure of reasoning skills. However, in business, we look to focus more on the skills that are relevant for a particular role. For example, if a company is recruiting for a role that requires them to have high numerical reasoning skills, a test can be designed that asks candidates to look at some data, make some calculations and draw a logical conclusion as a result of it. With verbal reasoning, candidates are usually given a passage of information and asked to read and interpret implications of the different parts of the passage. There are also measures of ‘pure reasoning’ skills, which are completely independent of language. These are called ‘abstract reasoning’ tests, and candidates are provided with a series of abstract shapes and are asked to identify which shape comes next in the sequence, for example.

Pictured above: an example of a verbal reasoning test question

As opposed to personality questionnaires, which look to assess what is happening underneath the surface of a candidate, behaviour is what you actually see candidates doing. For example, an individual can have a personality trait which makes them more introverted or shy than others inside, but that candidate may have developed a repertoire of behaviours and coping strategies that mean you are a very effective presenter, for example.

In a testing sense, in order to look at people’s typical behaviours you may look at a Situational Judgement Test (SJT), because you’re providing candidates with a hypothetical scenario, and gauging how candidates would be most and least likely to behave. These tests are carefully designed to try and link to the behaviours within the job. 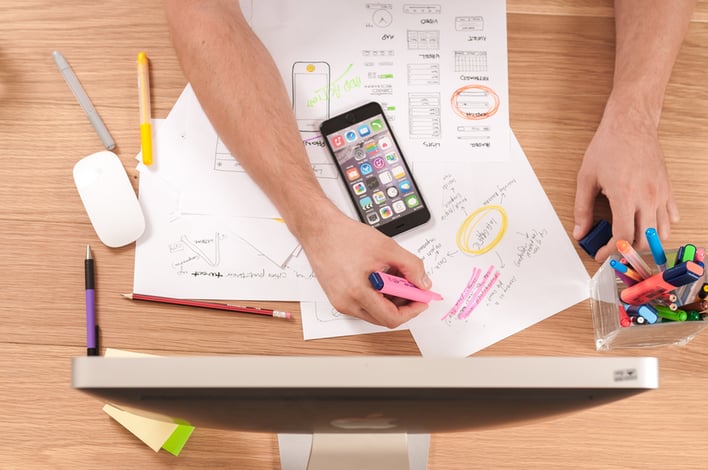 Demonstrating how predictive a test is

In order to prove that a test or questionnaire is predicting what it should be, we have to take an individual’s test score, and then we have to take a score which represents that person’s job performance (or some sort of criteria for success) and the two must be correlated. This correlation identifies the strength of the relationship between two things. An example of a correlation would be: sales of umbrellas tend to go up when it’s raining. In a workplace setting, we are looking for a correlation between test performance and job performance (i.e. the better someone performs in a test, the better the job performance).

The challenge is how to measure job success. You can do this through ‘hard criteria’, here are some examples:

The other way to measure job success is through ‘soft measures’.

When Sten10 build an online assessment, they will work closely with clients to identify success criteria right from the outset, so that the test is built to predict exactly what the clients wants it to predict.

When it comes to predicting job performance of individuals who have performed well in an online assessment, it is advised that this is done after at least six months within the role, but more commonly this would be between 12-24 months. For attrition, you can start measuring right from the beginning how long staff have been in the roles.

How many different tests should we use for selection?

Ben, with a psychologist’s hat on, would – of course – like to measure every single trait possible. However, in the real-world, for candidates, it is probably not recommended to put too many assessments in place because competitors could be quicker to offer a job, or candidates may drop out because they find the process too onerous; there's a law of diminishing returns of with the number of assessments included and how much predictive power this provides.

The research says that an ability test predicts performance the best, as a single measure.  SJTs have been shown to predict performance over and above Personality Questionnaires, and they tell us something different.

Personality questionnaires are more towards the acceptable level when you look at multiple scales. SJTs have been shown to predict performance over and above questionnaires and ability tests and they tell us something additional. For this reason, the last 5 years have really seen an explosion in the use of SJTs.

What is a Situational Judgement Test?

Companies were wanting to go for the perfect blend of automation and predictive power, Ben would recommend using an ability test and an SJT, with the SJT being completed first. Although they’re not quite as predictive as ability tests, they have a huge benefit in that, because they give the person applying some insight into the company they’re joining – meaning that they can self-deselect from the process, saving a huge amount of time.

Although there are some SJTs that are available off-the-shelf, if businesses don’t go bespoke with SJTs, they are missing the huge benefit of giving people an insight into the role. An off-the-shelf SJT will have a set of generic or ‘vanilla’ scenarios that are could be applicable to a range of businesses; the scenarios will not be tailored to your business and, as such, candidates won’t be able to get a realistic insight into the role or company , and they are potentially less valid as a result.

A good example was an SJT designed for use with a large regional police force. They were facing a lack of applications from people from ethnic minority groups. In order to help with this, an SJT was designed with instructions written to evoke a positive motivational mindset for everyone taking the test before they begin. As a result, not only did drop out rates between different ethnic groups equalise, but also actual performance in the test.

Ben and his team at Sten10 do work across an array of organisations, from health care, to public sector, banking to utilities, and we’re delighted to have partnered together by providing the assessment platform for many of these projects.